STAY UPDATED WITH THE LATEST NEWS REGARDING MACRA & MIPS

The Healthmonix Advisor is a free, weekly news source that connects you to the latest in the value-based care industry!

Episode-based cost measures represent the cost to Medicare for the items and services provided to a patient during an episode of care (“episode”). In all supplemental documentation, “cost” generally means the standardized Medicare allowed amount, and claims data from Medicare Parts A and B are used to construct the episode-based cost measures.
The Hemodialysis Access Creation episode-based cost measure evaluates a clinician’s risk-adjusted cost to Medicare for beneficiaries who undergo a procedure for the creation of graft or fistula access for long-term hemodialysis during the performance period. The cost measure score is the clinician’s risk-adjusted cost for the episode group averaged across all episodes attributed to the clinician. This procedural measure includes costs of services that are clinically related to the attributed clinician’s role in managing care during each episode from 60 days prior to the clinical event that opens, or “triggers,” the episode through 90 days after the trigger.

In 2015, there were 124,114 newly reported cases of end-stage renal disease (ESRD), bringing the total number of people with ESRD to 703,243. Patients aged 65 and older accounted for over 207,000 of those cases of ESRD and accounted for approximately half of all individuals who received hemodialysis access for that year, a 22 percent increase from 2010. However, for new cases of ESRD, less than 20 percent begin hemodialysis using either a fistula or a graft, which confer decreased morbidity and mortality rates and lower cost. The United States Renal Data System (USRDS) 2017 Annual Data Report found that Medicare spent $33.9 billion on beneficiaries with ESRD, and when combined with the cost of Chronic Kidney Disease (CKD), a total of over $98 billion. For hemodialysis care, Medicare spent a total of $88,750 per patient per year, excluding unknown modalities, and $1,677 for vascular access procedures (procedures to place or create vascular accesses and procedures to maintain them). The Hemodialysis Access Creation episode-based cost measure was recommended for development by an expert clinician committee—the Peripheral Vascular Disease Management Clinical Subcommittee—because of its high impact in terms of patient population and Medicare spending, and the opportunity for incentivizing cost-effective, high-quality clinical care in this area. Based on the initial recommendations from the Clinical Subcommittee, the subsequent measure-specific workgroup provided extensive, detailed input on this measure.

Measure Numerator:
The cost measure numerator is the sum of the ratio of observed to expected payment-standardized cost to Medicare for all Hemodialysis Access Creation episodes attributed to a clinician. This sum is then multiplied by the national average observed episode cost to generate a dollar figure.

Measure Denominator:
The cost measure denominator is the total number of episodes from the Hemodialysis Access Creation episode group attributed to a clinician.

Cohort
The cohort for this cost measure consists of patients who are Medicare beneficiaries enrolled in Medicare fee-for-service and who undergo a procedure for the creation of graft or fistula access for long-term hemodialysis that triggers a Hemodialysis Access Creation episode.
The cohort for this cost measure is also further refined by the definition of the episode group and measure-specific exclusions (see Appendix A).

There are two overarching processes in calculating episode-based cost measure scores: episode construction (Steps 1-3) and measure calculation (Steps 4-6). This section provides a brief one-page summary of these processes for the Hemodialysis Access Creation cost measure, and Appendix A describes the processes in detail.

This section contains the technical details for the two overarching processes in calculating episode-based cost measure scores in more detail: Sections A.1 through A.3 describe episode construction and Sections A.4 through A.6 describe measure calculation.

Trigger and Define an Episode

Once a Hemodialysis Access Creation episode is triggered, the episode is placed into one of the episode sub-groups to enable meaningful clinical comparisons. Sub-groups represent more granular, mutually exclusive patient populations defined by clinical criteria (e.g., information available on the beneficiary’s claims at the time of the trigger). Sub-groups are useful in ensuring clinical comparability so that the corresponding cost measure fairly compares clinicians with a similar patient case-mix.
Codes used to define the sub-groups can be found in the “Sub_Groups_Details” tab of the Hemodialysis Access Creation Measure Codes List file. This cost measure has two sub-groups:

Attribute Episodes to a Clinician

Services, and their Medicare costs, are assigned to an episode only when clinically related to the attributed clinician’s role in managing patient care during the episode. Assigned services may include treatment and diagnostic services, ancillary items, services directly related to treatment, and those furnished as a consequence of care (e.g., complications, readmissions, unplanned care, and emergency department visits). Unrelated services are not assigned to the episode. For example, the cost of care for a chronic condition that occurs during the episode but is not related to the clinical management of the patient relative to the graft or fistula access creation procedure for long-term hemodialysis would not be assigned.
To ensure that only clinically related services are included, services during the episode window are assigned to the episode based on a series of service assignment rules, which are listed in the “Service_Assignment” tab of the Hemodialysis Access Creation Measure Codes List file.
For the Hemodialysis Access Creation episode group, only services performed in the following service categories are considered for assignment to the episode costs:

The steps for assigning costs are as follows:

Measure scores are calculated for a TIN or TIN-NPI as follows:

A diagram demonstrating a visual depiction of an example measure calculation can be found in Appendix B. 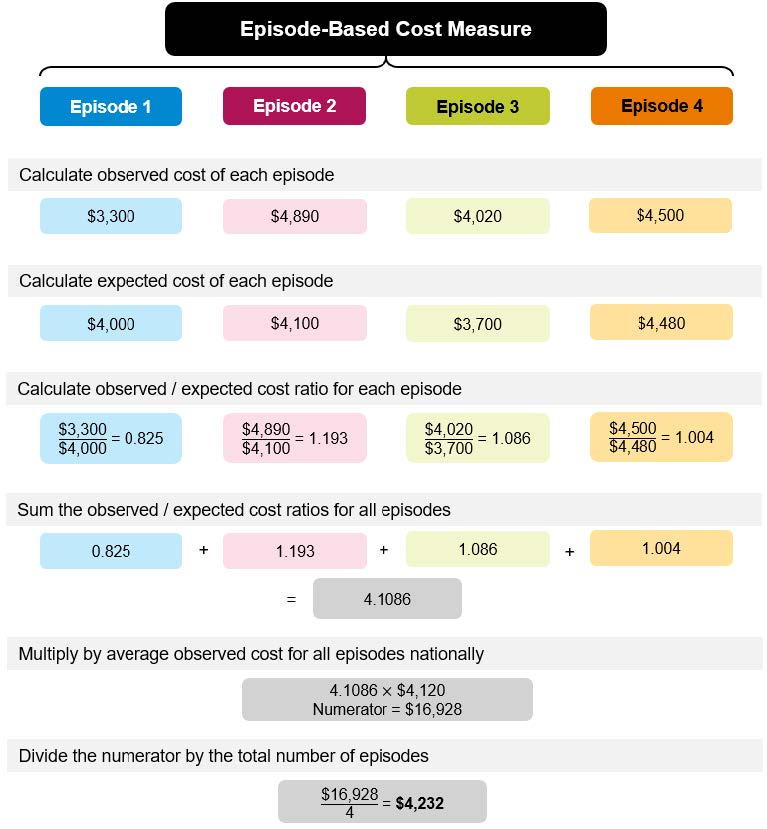